If you’re ready to cut the cord, your first step is buying an HD antenna. Depending on where you live, these inexpensive replacements for rabbit ears offer more than a dozen over-the-air channels that you can get without paying a dime.

Unfortunately the fact that TVs can receive these channels is a fact that has largely been obscured by cable companies that are all-too-eager to sign you up for an expensive cable plan. That said, while over-the-air broadcasts are much more limited than any cable package out there, they’re totally free and still usually carry the biggest sports match-ups (the NFL on Sunday, the NBA Finals and the Stanley Cup), plus sitcoms, dramas and comedy shows from NBC, ABC, CBS and more.

But which HD indoor antenna is the best? Well, that’s exactly what we wanted to find out, so we called in a whole bunch from various manufacturers and put them to the test. What you’ll find below is, in our opinion, the definitive round-up of the best indoor TV antennas for your money in 2020.

It’s right there in the name: Amazon’s own antenna option is basic indeed, with a very thin, paper-like slab of plastic that mounts to your wall with the included double-sided adhesive pads. This one isn’t amplified, so there’s no power plug needed—it simply plugs into the coaxial input on your television.

In our testing location, we consistently saw stellar results with the AmazonBasics Indoor Flat TV Antenna, which is rated to reach sources up to 35 miles away. There were occasional discrepancies, though, such as struggling to get the local PBS channels. You may need to play around with positioning in your space to maximize the reach, but that’s true with most indoor antennas.

If you live close to a major city, for example, this could be all you need. And at an asking price of just $20, it’s a great deal if it fits your situation. Amazon used to sell a longer-range, amplified antenna rated for up to 50 miles, but it is now discontinued. If you live further out from a major city or broadcast source, or you anticipate having reception issues, then you may want to opt for an amplified alternative instead.

The TERK Trinity Amplified Indoor HDTV Antenna doesn’t look like any other TV antenna that we’ve seen, but it does look a lot like some internet routers we’ve used. We like the slim, distinctive look, plus the ability to adjust and reposition the three tri-modal antennas as needed to maximize reception.

We saw strong results in both testing locations, on the ground floor and second floor, especially with the antennas pointed towards the city. This amplified antenna is rated for up to 60 miles, which gives you a lot of range to work with, and the $40 price tag is great for a long-range indoor antenna that actually lives up to its claims.

The ClearStream Eclipse 2 is similar to Amazon’s thin, plastic antenna at its core, but this very distinctive figure-eight design is one of a kind. Whatever engineering Antennas Direct did to pin down this kind of design clearly worked, however, as this amplified long-range antenna does an excellent job of picking up channels.

It’s rated for 60+ miles and consistently delivered strong reception while pulling in all of the channels we expected to see. It also comes with curved double-sided tape pads that sit on the upper and lower backs of the design, ensuring a snug fit to your wall. It’s a pricey option at $70, but that’s an investment in a quality product.

If you live far from a broadcast source and/or you’ve had trouble with other antennas, the Antop HD Smart Bar (AT-500SBS) could solve your issues—if you’re willing to pay a steep price and tolerate the very large size.

The Antop HD Smart Bar is a hard-plastic antenna that measures 2.5 feet wide and can be mounted on your wall like a soundbar, or you can use the included base stand to prop it up vertically. In any case, it’s much more visible than nearly any other indoor antenna on the market, but the trade-off is a much longer promised range of 80 miles. It also has a 4G signal filter, an FM tuner, and the ability to connect to a second TV, plus the reception was excellent in our testing. However, with a $119 price tag, we recommend trying cheaper alternatives first to see if they’ll meet your needs. 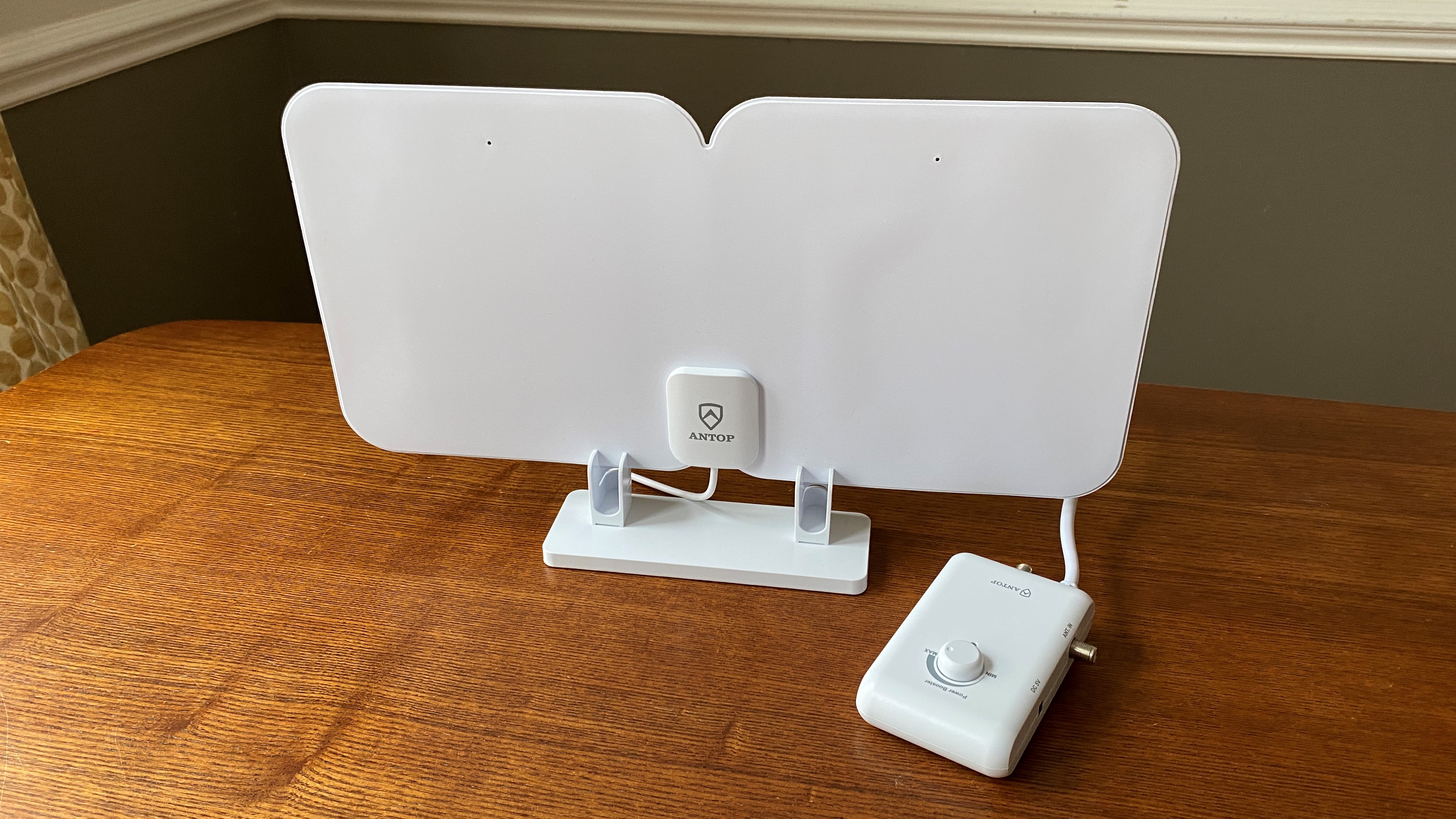 Antop’s HD Smart Antenna (SBS-301) keeps most of the perks as the Antop model above, but does so with a slimmer design and slightly lower price. It’s a flat plastic design like Amazon’s antenna, but actually looks like two of them merged together. You can stick it to a wall with the included Velcro pads or prop it up using the simple plastic stand. In our testing, it pulled fewer channels on the stand next to the TV than when it was mounted higher up on the wall.

This amplified antenna’s range is slightly less than the Smart Bar at 70 miles, but it still has the 4G signal filter, FM tuner, and ability to connect to two TVs at once. The $89 price point is easier to stomach too, even if it’s higher than all the other non-Antop antennas on this list. The signal looked great to us, but as with the Smart Bar above, this might be an option for those who are having reception issues using other antennas.

Winegard’s amplified FlatWave FL5500A antenna checks all of the same boxes as the AmazonBasics model listed above. It offers a 50-mile range, is flat and nearly paper-thin with black and white sides, and delivers a strong 1080p signal. In our testing, it found just over 50 channels in both locations. We have no complaints about the device itself.

Really, our only issue that the FlatWave FL5500A costs more than double the price of the AmazonBasics 50-mile option, and truth be told, we couldn’t tell a difference between them in use. They are nearly identical across the board, but based on current pricing, you’ll save more than $25 with Amazon’s model. It’s great, but there’s no clear reason to pay extra that we could see.

Mohu’s new Blade antenna is a one-of-a-kind – instead of a floppy sheet, it’s a thicker, rectangular plastic panel that you might not be compelled to hide. You could mount it on the wall below the TV like a soundbar, or there’s a little attachable kickstand if you’d rather put it on a TV stand. In any case, it’s stylish in a way that most antennas simply don’t strive to be. And if you want, you can mount it in an attic or even outside.

But that style comes with frustrations. We struggled mightily to attach a coaxial cable or 90-degree coaxial adapter to the back of the antenna, because its coaxial connector is wedged so tight to the backing. Ultimately, we used a screwdriver to remove the spongey support ring on the back to give our hands a bit more room, and then had to use pliers to tighten the adapter because it wouldn’t budge using our fingers. It was a real pain.

Once it was finally up and running, we searched multiple times and found fewer channels with the ground-floor TV – just 44 max, compared to 50+ with the others. None of the omissions were crucial, but it was still a difference. Upstairs, we had to play around with the location before hitting the same 50+ mark as the other antennas. The Blade is sleek and stylish, but the smaller size brings a couple of frustrations along with it.

Antenna scams you should know about

Recently there have been a number of misleading product pages on Amazon that have promised customers outrageous features like a 120-mile range and 4K resolution. Do not take them at their word. These claims are misleading and, with our current technology, impossible.

You can read a great breakdown of lies antenna manufacturers tell you over on TechHive, but suffice it to say that the curvature of the Earth prevents more than an 80-mile range for broadcasts and no broadcast station in America currently puts out a 4K OTA signal. That is going to be part of the next set of ATSC standards that’s currently in development and is called NextGen TV. That should start rolling out by the end of 2020.

For this piece, we tested indoor antennas that remain near your TV, both standard antennas that connect solely via coaxial cable, and amplified ones that add a USB connection or must be plugged into a wall outlet for a powered-up range boost.

We tested several current indoor TV antennas from the top makers in the business, watching to see how many channels each antenna could find, how easy it was to set up, how crisp the signal looked, the style and size of the device, and the price and overall value.

Our testing environment was a two-story house just outside of Chicago, less than 15 miles from downtown. Each antenna was tested on two televisions: one on the first floor, and another upstairs on the second floor.

Even if modern antennas are more reliable than the old versions, they can still be fickle: your distance from broadcast towers is important, but so too is where you place the antenna, where you are in your home, and what’s around it. Your experience may vary to ours, as a result, and you may need to experiment with location to yield the most channels to watch.

These are the best indoor TV antennas that we’ve tested so far, and we’ll be adding more to the list once we try more models.