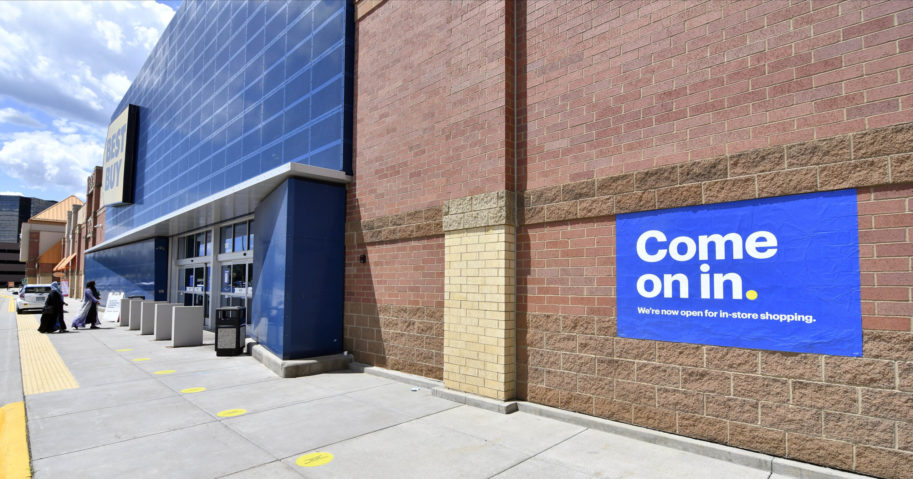 Jim Mone / APShoppers head to the entrance as a sign invites customers to shop inside a Best Buy store on June 24, 2020, in Richfield, Minnesota. Restrictions due to the coronavirus have eased in Minnesota. (Jim Mone / AP)

American consumers increased their spending by a record 8.2 percent in May, helping to erase huge economic plunges the previous two months.

Last month’s rebound in consumer spending followed record spending drops of 6.6 percent in March and 12.6 percent in April, when lockdowns shuttered businesses, forced millions of layoffs and sent the economy into a recession.

Since then, many businesses have reopened, drawing consumers back into shops and restaurants and restoring lost jobs.

Friday’s Commerce Department report showed that Americans stepped up their spending in May despite a 4.2 percent decline in personal income, which had soared by 10.8 percent the previous month.

Income had jumped in April due to billions of dollars of government payments in the form of unemployment aid as well as one-time $1,200 stimulus checks. In May, those stimulus checks were no longer counted as income for most people.

Besides the unemployment aid states are providing to the 30 million jobless Americans, the federal government is handing out $600 a week in additional benefits.

The federal money has pumped nearly $20 billion a week into the economy.

The $600 a week in aid will expire after July, and Trump administration officials have said they oppose an extension.

Consumer spending is closely watched because it accounts for about 70 percent of economic activity.

Do you believe the economy will continue to rebound?

The increase still left spending 11 percent below its pace before the shutdowns.

Despite the surge in May, experts have estimated that the economy, as measured by the gross domestic product, is contracting at a roughly 30 percent annual rate in the April-June quarter.

That would be the worst U.S. quarterly contraction since record-keeping began in 1948.

Friday’s report showed that among the categories in which consumers picked up spending in May, the sharpest increase — a 29 percent jump — was for durable goods, led by purchases of autos and recreation vehicles.

Spending on non-durable goods, which are items like food and clothing, rose nearly 8 percent.

RELATED: ‘Get the House in Order’: Gosar Highlights Need for Conservative Reclamation of Capitol Hill

And spending on services — everything from cellphone contracts to hospital visits — rose more than 5 percent. The service-sector increase was led by spending on health care, which had been curtailed before May by limits imposed on elective surgery.

Inflation, as measured by a gauge tied to consumer spending, edged up a scant 0.1 percent in May, the report showed. Inflation over the past year is just 0.5 percent, far below the Fed’s annual 2 percent target.

In February, the economy fell into a deep recession, according to the National Bureau of Economic Research,